This unnamed female individual worked as a hostess in the Harvardville Airport's VIP lounge. She served Senator Ron Davis coffee, which he rejected, demanding to know "What tar pit did this crap ooze out of?" She then gives him an apology, returning to make another 'fresh' one. She seemed rather a timid individual, but could be strong and determined when called for as she was willing to leave the relative safety of the lounge to search for survivors with Claire.[1]

During the terminal chaos, she was still present in the VIP lounge when Claire Redfield took refuge there along with Rani Chawla and the senator. After they were joined by Leon S. Kennedy and two member of the Special Response Team, the hostess joined the group in an attempt to escape the now overrun airport. As they were crossing the airplane wing, she was taken by surprise by zombies spilling out of the plane and falls over, nearly falling victim but is saved when they get gunned down by Leon and Angela. As soon as they saw the light, she and the rest of the survivors made a dash for the exit, leaving her as one of the few survivors in the terminal.

About to be attacked 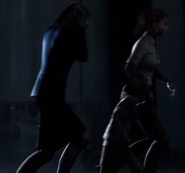 Escaping with the group

Handing over coffee to the senator

Making a funny face at the senator 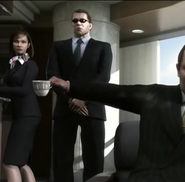