The VZ61 appears as a submachine gun found in Resident Evil 5. It is based on the Škorpion vz. 61‎.

Found in Chapter 1-1 in the Public Assembly, near the red gate which will be blown by Kirk, it is the first rapid fire weapon available to players and the first weapon overall apart from the non-optional M92F. As a result, the player has ample time to purchase upgrades for it.

The weapon has low firepower, but when fully upgraded has a high critical rate, making decapitation shots more frequent.

Fully upgrading the VZ61 and beating the game will unlock the Gatling Gun for purchase. Doing so will also open the option to buy infinite ammo for the VZ61 for 6,000 Exchange Points.

In The Mercenaries minigame, the VZ61 appears in the loadouts of Sheva (BSAA) and Jill (Battlesuit). Under control of the P30, Jill Valentine dual wields this weapon in the main game. A single VZ61 is also her default weapon in the Desperate Escape DLC. 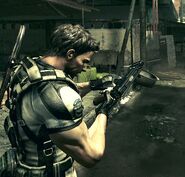 Retrieved from "https://residentevil.fandom.com/wiki/VZ61_(MG)?oldid=806280"
Community content is available under CC-BY-SA unless otherwise noted.