Valkoinen Mökki Airport was a small airport located at the bottom of an afforested mountain range in Finland, possibly Lapland.

In 2005, the airport was taken over by a terrorist organisation bearing the name "Il Veltro", unrelated to the 2004 organisation of the same name. The group gained possession of Farfarellos, which soon got out and began killing them. One member was able to escape in a transport plane, but damage to one of the jet engines caused it to crash in the mountains after making a pass, killing the pilot and releasing the other B.O.W.s kept as cargo. The airport was soon secured by the BSAA for investigation, but was destroyed same same night in a bombing raid by the FBC. 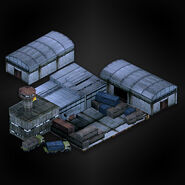 Retrieved from "https://residentevil.fandom.com/wiki/Valkoinen_Mökki_Airport?oldid=842890"
Community content is available under CC-BY-SA unless otherwise noted.