Footpath to the village

The village center (村中央, Muranaka hisashi?) is the central area in the village. It will be visited three times in the main game and is the starting location for Ada in Separate Ways.

This is a village where it's people have been infected by the Las Plagas, and considered to be more hostile than normal. There are multiple houses can be seen here along with a watchtower and couple of huts. A dirty well can be seen here, along with crates and boxes. Livestock such as chickens and cows also reside here. A large pyre sits in the center of the pueblo, which is used to put a police officer's dead body on display after being killed by the locals.

Upon entering the area for the first time Hunnigan will call Leon and give him the Playing Manual 2. Walking halfway up the path will give Leon the option to spy on the villagers up ahead with his binoculars.

Inevitably, the villagers must be dealt with. Once they begin their attack, you will be unable to escape the loaded area until the battle has ended.  On your first visit, attempting to leave while in combat with the villagers via the southern or eastern exits will cause even more villagers to spawn alerted to your presence, but not adding to the total number of kills you need to progress. The northern exit to the Farm is guarded by a Chainsaw Man, who will drop a Ruby upon death.

Entering the two-story house on the left side of the area will trigger a cutscene, where the house is surrounded by all sides, and the villagers redoubling their effort in killing the player. This adds a Chainsaw Man, who drops 5000₧ in gold bars upon his death. Inside the house on the ground floor, you can find a push-able bookshelf to further reinforce an already planked-over window where ganados will attempt to enter. Also on the ground floor, behind the stairs, is a box of Handgun Ammo and two barrels containing ammo or money. Upstairs, there is the Shotgun mounted to the wall, as well as a Hand Grenade behind some glass in a cabinet. A box of money sits on a table next to the cabinet, and some Shotgun Shells sit on the bed past that. There are two windows upstairs, one with a ladder erected to it for villagers to climb, and the other leading out onto an expanded bit of rooftop, with another ladder leading up to that. These ladders can be knocked down to temporarily prevent external access. The extended roof outside leads to the rooftop of a nearby house with two chimneys, with a box of Handgun Ammo sitting on the chimney closest to the window. Following the roof around to the other side of the two-story building will net you a Spinel.

The building next to the two-story building has some Handgun Ammo sitting on a shelf, and a guaranteed Incendiary Grenade inside one of the boxes on the table at the back of the house. There is one window facing west, that the player can jump through.

In the north-eastern part of the pueblo, there is a small house with one door leading in and no windows. A tipped over barrel inside provides a random item, and a door with a padlock on it at the back of the room can be kicked off to gain access to the room. Alternatively, the lock can be shot or knifed to gain quicker access. Through the door you can find a crate and a barrel, with the crate providing Shotgun Shells and the barrel providing a random item. This room makes a good holdout point, considering there is only one entrance that can easily be camped with the Shotgun, if you picked it up.

A small watchtower at the northern edge of the town center, which consists entirely of a long ladder leading to the top, with a table and Shotgun Ammo. Staying up here for any extended period of time causes the villagers to pelt the tower with molotov cocktails, leading to a swift, fiery death.

Other points of interest include of a small shack near the eastern exit that contains one Flash Grenade and a random item. A Yellow Herb sits in a box at the east side of the pueblo, on the other side of a small barn. A Red Herb sits on a cart directly opposite the box, up a small incline. Around the far side of the house that the cart is next to is a small wooden structure with a Green Herb hiding inside of it. There is an additional Green Herb inside of a box behind the second building in the western part of the pueblo, up against a log pile. Finally, there is a hidden box of Handgun Ammo in a small wooden structure to the left of, and connected to, the building with the locked insignia door at the north end of the town center.

After defeating a handful of ganados, a cutscene will play where more storm the village to attack. After defeating a fixed amount (20 or so), another cutscene will play where the church bell rings and the rest retreat. Afterwards Hunnigan will call Leon again and the player can continue to the Farm by following the path to the northern exit from the pueblo. Along this path you can find a three small shacks. One contains a box that provides a random item, another is empty, and the last contains a table with a box of Handgun Ammo and the Alert Order document. Continue north to find the exit.

Player character begins in the north part of the pueblo, next to the building with the locked insignia door. The item layout for this version of the pueblo is very much the same as it is in the main game, with a few notable differences. Inside the building with the padlocked door inside, there is a Hand Grenade sitting on the floor upon entering the building. On the table is a basic Chicken Egg. Inside the padlocked room on the bed is an Elegant Mask. Near the south exit of the village is a box of Shotgun Shells and a Spinel. Next to the north exit, sitting on a wall is another Spinel. The Shotgun inside the two-story house cannot be picked up, and the Hand Grenade in the cabinet has been replaced with a box of Handgun Ammo. Outside on the extended rooftop, there is no more Handgun Ammo sitting on the chimney. Most importantly, the Insignia Key now sits on the rooftop of the house with the padlocked room. All other item locations remain the same as in the main game, so please refer to the previous section for original item locations, barring the exceptions made here. In addition to these item differences, there will be no Chainsaw Men to fight in this area, and entering the two-story house doesn't trigger a cutscene as it originally did.

The goal of being in this area is different from the main game. Kill villagers and scavenge items to pass time until a scene plays where a chicken jumps off of the roof of the house with the padlocked door inside. Entering and exiting this building once appears to help speed up this process. This will reveal the Insignia Key. A contextual 'Hookshot' action appears when standing near the front of the house, allowing access to the roof and the key. Using this key on the locked insignia door will allow exit from the pueblo to the Cave.

After player had enter the Village center for the first time:

Hunnigan: Leon. How ya holding up?
Leon: Bad question Hunnigan.
Hunnigan: Sorry to hear that... I'm sending you a playing manual. Hope you find it useful.
Leon: I'll take a look at it. Thanks.

After the church bell, thus distracting all the villagers:

Leon: I have some bad news. I've confirmed the body of an officer. Something happened to the people here.
Hunnigan: Leon you need to get out there. Look for a tower. Follow the trail near it.
Leon: Got it.

"There's some kind of symbol on the door"

"The water is awfully dirty"

"Many small insects are feasting on leftovers"

"It appears that the stains are a person blood"

"There are several small items here, Nothing useful though"

"There's an unpleasant odor coming from the kettle"

Traps has been prepared
Add a photo to this gallery 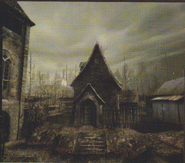 Retrieved from "https://residentevil.fandom.com/wiki/Village/Village_center?oldid=688460"
Community content is available under CC-BY-SA unless otherwise noted.