The W-870 is a shotgun in the Resident Evil 2 remake. This weapon is only retrievable in Leon's campaign.

By default it can hold a maximum of four Shotgun Shells in its magazine tube. Upgrading it with the Long Barrel makes it have less spread, increasing the amount of pellets hitting a target at a further range, as well as increasing the capacity to eight shells, while the Shotgun Stock increases fire rate as well as reloading speed.

The Long Barrel will increase the shotgun's size, taking two slots in the inventory from then on. It can, however, be taken on and off at will to accommodate for Leon's inventory management needs. The Stock, on the other hand, won't increase size, and will neither give the option to be taken off once applied.

The Shotgun will most likely be Leon's main weapon for taking down zombies, as it possesses the ability to nearly guarantee a critical headshot to a zombie's head on a pointblank range. The shotgun will always decapitate a zombie if 6-7 pellets out of one shot hits a zombie's head, even if a zombie would still have health remaining afterwards. Using the Long Barrel will increase the range from which this can be done, reducing risk for the player.

Even when not aiming for the head, the shotgun possesses acceptable stopping power to stun regular enemies and good damage; capable of taking down a Cerberus in one shot, as the game's code makes shotguns deal 144% damage towards them, as all the while a reliable weapon against tougher enemies such as Lickers and Ivies. Ammo for it is likewise relatively plentiful; being easily crafted from the abundant gun-powders in the game.

Leon holding the W-870 near the Entrance.

Blasting a zombie's head off with it. 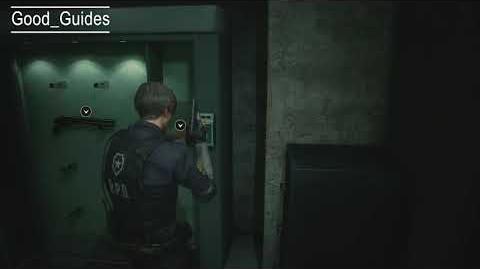 Resident Evil 2 Remake Guides How to get the Shotgun
Add a photo to this gallery
Retrieved from "https://residentevil.fandom.com/wiki/W-870?oldid=857535"
Community content is available under CC-BY-SA unless otherwise noted.