The Werewolf was a human mutant that inhabited Raccoon City in 1998.

The Werewolf first showed up in Raccoon City in the week before the Mansion Incident.[note 1] where it terrorized those living at Raccoon City College. Its first victim was a girl called Julie, who George described as having been torn to pieces. Despite the seriousness of a murderer being on the loose - not just a wild animal - the college decided to keep the events out of the paper. With the brutal killing of Michelle Allen on campus grounds, the newly formed S.T.A.R.S. team was contacted, with Jill Valentine masquerading as a transfer-student to ascertain who the killer might be. Following the same route and time as Michelle, Jill fooled the werewolf into pursuit, hoping for Barry to help capture it. Taking too much time to arrive, Jill took out her Smith & Wesson and shot the werewolf. Upon death, the creature turned back into a human form, with the killer being reported simply as a "naked weirdo", in the words of Barry.[1] 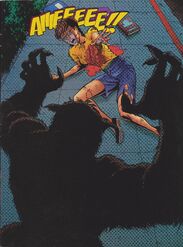 Retrieved from "https://residentevil.fandom.com/wiki/Werewolf?oldid=803479"
Community content is available under CC-BY-SA unless otherwise noted.