Albert Wesker had a secret control room. It was here that Wesker hid all of his accumulated data files, planning to replace the Umbrella Corporation and Oswell E. Spencer as the leading power in the underworld B.O.W. market. The location and true nature of this base remain unknown.

Following his personal raid on the Caucasus Laboratory, the final stronghold of the once mighty Umbrella, Wesker placed all of the company's digitized information stolen from the U.M.F.-013, including a copy of the advanced Red Queen A.I., into his own computer system.

With priceless Umbrella assets at his fingertips, Wesker was able to nail his former employer's coffin by presenting B.O.W. manufacture and viral development data he had retrieved as evidence against the company and Spencer to the United States Supreme Court in the trial concerning Raccoon City.

Soon after, he disappeared and retained full access to the Umbrella Archives and satellite array, able to image any location on the planet's surface. Wesker vowed to use these resources to track down Spencer and discover the true purpose behind his plans.

While in this remote location, Wesker made use of agents such as Jack Krauser and Ada Wong to do his bidding in the outside world. In 2004, Wesker sent the two to retrieve a dominant species Plaga sample from Los Iluminados so that he could send the advanced Las Plagas type to TRICELL for research and weapon's development.

Wesker kept an eye on the two and Secret Service Agent Leon Kennedy throughout the entire affair from his control room's satellite feed. After killing a mutated Krauser and stealing the sample from Leon, Ada proved her loyalty to rival company whom Wesker had betrayed in favor of TRICELL, sending him a subordinate species Plaga instead.

Despite this attempt at sabotaging his plans, Wesker was able to utilize a dead dominant species Plaga from Krauser's corpse. After channeling all of his money, connections, and time into finally tracking down Spencer, it is unlikely that Wesker made any further use of this base.

The control room was a technologically advanced but largely ambiguous space consisting of a long, dark staircase illuminated by red lights, a rotating chair, and a large holographic projection screen. Beside the chair was a post that remotely rose out of the floor in which discs could be inserted for files to be accessed on the computer. Both armrests of the hi-tech chair had green digital keypads with finger-scrollers.

The keypad on Wesker's chair. 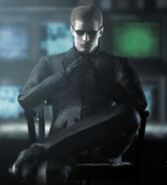 Command Room in RE4 Mercenaries?
Add a photo to this gallery
Retrieved from "https://residentevil.fandom.com/wiki/Wesker%27s_control_room?oldid=426570"
Community content is available under CC-BY-SA unless otherwise noted.