Start a Wiki
watch 02:27
The Loop (Games)
Do you like this video?
Anderson universe
(Covers information from Anderson's universe)

Active as late as 2007 during the Global T-virus Pandemic, White Queen assisted Dr. Alexander Isaacs in tracking Alice and monitoring the progress of the Alice clones. When confronted with the actions of the Red Queen, she defended the measures taken by her sister-computer during the T-virus outbreak in The Hive, saying that the Red Queen had taken the most logical steps to ensure the preservation of humanity.

When Issacs returned to the underground facility and mutated into a hideous Tyrant, the White Queen responded in a similar fashion to her sister by trapping him and the remaining employees within in an attempt to control the situation. In exchange for allowing Alice to use the equipment to concoct a Anti-virus from her blood, she aided the former Umbrella employee in defeating the mutated Isaacs by providing information. She sends Alice down into the lower levels of the facility to face him with a simple "good luck". 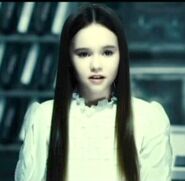 Retrieved from "https://residentevil.fandom.com/wiki/White_Queen_(Anderson)?oldid=804647"
Community content is available under CC-BY-SA unless otherwise noted.