watch 03:03
The Loop (Games)
Do you like this video?
ORC backstory
(Operation Raccoon City's backstory)

Dr. William Birkin was an Umbrella researcher linked with the viral outbreak in Raccoon City.

In his role as the chief researcher at Umbrella's underground facility, Dr. Birkin led the G-Virus development project as well as the NE-β Type parasite.[1]

In mid-1998, Birkin's fellow researchers noticed a change in attitude, reducing his speech in telephone calls to simple 'yes' and 'no' answers.[1] The Umbrella Psychological Evaluation Unit judged Dr. Birkin to be a somewhat conflicted individual obsessed with his work. While they found him to be mentally capable of his virology research into the G-Virus, the unit felt it appropriate to keep a close eye on him, anyway.[2] This is evident by them asking as many questions about William as they did Annette during his wife's own evaluation.[3]

In September 1998, Umbrella found that Dr. Birkin was ready to turn over his completed G-Virus research to the US military, having concluded that they would simply kill him and steal his research as he had done to Dr. Marcus.[4] In order to prevent the transaction, USS Command sent in the Alpha and Delta teams, who soon discovered that the Doctor had successfully paid off a unit of UBCS mercenaries to protect him. Two members of the Alpha Team succeeded in reaching Dr. Birkin and, after a short fight, escaped with his samples. Birkin infected himself with a sample of the virus left with himself, and mutated into a large creature, proceeding to chase down the Alphas and Deltas, leading to the samples being lost during the encounter. HUNK led the Deltas out of the sewers, electing to go up against Birkin alone in order to recover the sample. 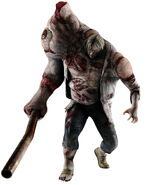 Retrieved from "https://residentevil.fandom.com/wiki/William_Birkin_(Operation_Raccoon_City)?oldid=806857"
Community content is available under CC-BY-SA unless otherwise noted.