Hirabayasi worked as a motion capture engineer for the remake of Resident Evil[1] and as a Scenario writer in the Script department for Resident Evil 5.[2] As a producer for Resident Evil 6, Hirabayashi wrote a message to Resident Evil fans regarding Jill and Claire's appearance in the game; his referral to "other great characters" suggested that they would not appear.[3] Hirabayashi later in 2014, presented several update videos of the Resident Evil HD Remaster on the official Resident Evil YouTube channel.[4][5]

Hirabayashi in 2015 during the announcement video of the Resident Evil 2 remake. 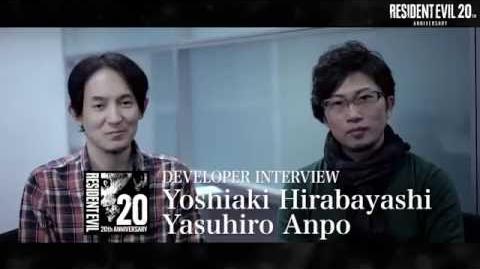 Retrieved from "https://residentevil.fandom.com/wiki/Yoshiaki_Hirabayashi?oldid=770901"
Community content is available under CC-BY-SA unless otherwise noted.