View source
watch 01:06
Who is Zoe Baker?
Do you like this video?
Play Sound
Prime universe
(Capcom's primary storyline)

Zoe Baker (ゾイ・ベイカー, Zoi Beikā?) is a woman from Dulvey, Louisiana who was involved in the Dulvey incident, a three-year series of abductions by her parents, Jack and Marguerite Baker, and her brother Lucas, all at the behest of Eveline, a young girl genetically-engineered to control minds.

Zoe lived with the Baker Family on the Plantation in Dulvey, Louisiana, with her parents and older brother Lucas. Zoe did an art project in the fourth grade of her and her family which hung in the dining room. There was an incident where Zoe called Lucas a pervert for watching her do yoga.[3]

On October 9, Lucas found a wrecked tanker washed up in the bayou due to a vicious storm, which Jack investigated the next day. In the wreckage, he found Mia Winters and housed her in the trailer that Zoe was living in. At this time, Zoe watched a news report on the storm in order to get a better understanding of the chaos, but Jack soon returned from the bayou carrying another survivor, Eveline, in his arms, which he suggested should be housed in Lucas' old room. Jack and Marguerite requested Zoe to bring a change of clothes to the girl, tasking her with cleaning the little girl up and making sure she was comfortable. However, before she had a chance to do anything, Eveline caused a blackout in the house and escaped into the darkness.

Believing that the incident was merely just a powercut, Zoe looked throughout the house for Eveline. However, she instead found Lucas lying unconscious on the dining room floor and heard the mumblings of her mother coming from the bathroom. Upon encountering her mother, Zoe was grabbed by Marguerite who muttered about the gift Eveline had given her and tried to force feed her bugs which came from her mouth. Jack came back just in time to save Zoe and restrained his wife, instructing Zoe to retrieve some rope from the garage. When she returned, she found her father trying to drown her mother. Though he seemed normal at first, Jack grabbed her and menaced her by cutting open his chest, claiming that doing so would show devotion to Eveline. Zoe fled from her father, using the rope to hold one of the doors shut and watched as he dragged Lucas to meet Eveline.

Successfully escaping from Jack and Marguerite, Zoe fled to the trailer, where she found another survivor, Mia Winters, lying on the floor. She found a letter on the table and read it, learning about Eveline and finding a strange head. Upon hearing the voice of Eveline, Zoe turned around to find her standing behind her. As the girl grabbed her arm, Zoe fell unconscious.

Zoe then suddenly woke up back at the dining table, convinced that the night she had experienced was simply a dream, and tried to explain it to her family. However, she was abruptly stopped by Jack, who explained plans to prepare for damage following the storm. Soon, Eveline appeared and addressed Zoe as her "sister", shocking her.

Living as an outcast

Unlike the rest of her family, Zoe was able to resist Eveline's mind control due to her knowledge about Eveline, despite being infected and refused to partake in the family's murderous activities, choosing instead to isolate herself from them in her trailer in the yard. Since she now possessed Eveline's "gift", the rest of her family appeared to be content with her isolation from them and made no attempts to force her into being part of their new family. They did however prevent Zoe from escaping the property and did not allow her to snoop into certain part of the house in the attempt to find the cure in Mia's letter. At some point, Zoe had a domestic spat with Marguerite which got so heated that she pulled out a knife that she had hidden on her own mother, having hid other knifes around the main house.[4] Realizing her family was beyond saving, Zoe attempted to cure herself and escape multiple times by assisting her family's kidnap victims in escaping, though none of them survived.

When Mia's husband, Ethan, arrived at the plantation following a message sent to him by Mia, Zoe first managed to get in contact with him by telephone, following a struggle between him and Mia in the Guest House. At first, she told him to escape using the attic window, but he was caught by her father before he could do so. Whilst Ethan was unconscious, Zoe reattached his severed hand which had been removed in a scuffle with Mia and gave him a Genome Codex to monitor his health.

After Ethan had escaped Jack and the rest of the family at the dinner table, Zoe contacted him and provided information about the house and hints on where to go. After Ethan escaped the main house on the plantation, apparently killing Jack in the process, he found her trailer and was once again contacted by Zoe who asked him to search the old house for the recipe to a serum which would cure Mia and herself of the infection, all the while warning him of her mother. After Ethan found the recipe, Zoe checked up on Ethan, and after being told by him that they needed a D-Series head and arm, she realized the value of the head she had retrieved from the trailer, and instructed Ethan to find the arm in the Old House.

After Ethan's successful finding of the D-Series arm, Zoe told him to meet her at the trailer, but shortly after she was kidnapped by Lucas and taken to the Boathouse alongside Mia as a captive.

She was eventually freed once Ethan had managed to outsmart and scare off Lucas, and now having the two ingredients she needed for the serum, she crafted two vials which she gave to Ethan. However, Ethan was soon grabbed and taken away by a heavily mutated Jack, requiring Zoe and Mia to flee to safety. As Ethan struggled to keep Jack down, Zoe suggested that he use one of the serums on Jack, which calcified him and successfully stopped his attacks.

Having only one serum left after the encounter, Ethan had to make a choice between curing Zoe or his wife Mia. Ethan ultimately chose to cure Mia, which made Zoe feel betrayed and made her angrily demand the two to leave without her, despite Ethan's promise that he will send help for her.

During Ethan's vision while trapped in the mold, Zoe was seen sitting alongside her father Jack, but did not speak at all to him during this vision.

As punishment for helping Ethan and Mia to try and escape, Zoe was calcified by Eveline, but remained alive. Following his rescue, Ethan asked Chris Redfield and Blue Umbrella to look for and rescue Zoe. Weeks after the escape and Eveline's death, Blue Umbrella's special forces team surveyed the Baker Ranch and the surrounding bayou and eventually found her, but were soon apprehended by her uncle Joe, who took her and one of the Umbrella soldiers to his cabin in the swamp in hopes of saving her from the infection. However, despite Joe's initial efforts resulting in finding a partial dose of the cure, it was not enough to fully cure her.

Zoe remained unconscious during the time Joe looked for her cure, with Joe taking her to an Umbrella camp in hopes of finding a full cure. However, during this time Joe was pursued by her father Jack, now under the guise of the Swamp Man, and she was soon kidnapped by her father and used as bait to lure Joe into a trap in one of the churches in the bayou.

Soon after, she was taken back to the Baker's main house, now another Umbrella camp, eliminating all Umbrella forces in his way and setting her up at the dinner table. However, upon Joe's arrival, she was tossed aside as they both had one final encounter which Joe was able to win. Joe finally managed to cure her by the time Chris Redfield and other Umbrella backup forces arrived.

Ethan later called a recovering Zoe, during which she thanked him for keeping his promise and sending help.

Zoe Baker was kept in quarantine following the Baker Incident, but was eventually released on the condition that she not reveal any information about the event to the public. She was then given a new identity and returned to her normal lives, now working as a rookie reporter in New Orleans. She kept this promise, but nonetheless conducted her own investigation into the events surrounding it. She managed to find limited information about the Connections and the origins of Eveline. Upon discovering that the Winters had been relocated to eastern Europe in a witness protection program, she tried to investigate further but is met with a brick wall as the BSAA's security was tight. Although she was unable to locate them for two years past, Mia Winters eventually sent her a letter through an employee, thanking her for her help in escaping the Bakers and telling her about the birth of her child, Rosemary Winters,[5] expressing her desires for her to meet the family. She was emotional from hearing this news alone but she also received another letter this time with the BSAA logo embedded in but no information on who the sender is, in it is a letter from the BSAA HQ describing Chris's insubordination and him hunting down Miranda and also him being very critical of them after the incident reveling the BSAA had tried to kill Eveline in Munich before she boarded the tanker but had failed, and covered up the Dulvey incident to save face. On the back of the letter writes "It's not over". Zoe then determines to investigate more to the matter for her family's sake and Winter's.

In the main game, she only interacts with Ethan by communicating with him through the telephones that are scattered throughout the Baker ranch.

In the Banned Footage Vol.2 DLC, Zoe is the player character of the "Daughters" scenario. She will have 12 inventory slots, starts with the Lighter, and cannot use the Guard command. 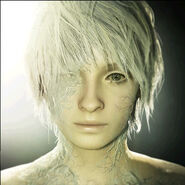