Zombie Dog (ゾンビ犬, zombi-inu?) is a term referring to domesticated canines infected with the t-Virus through its secondary method, namely the ingestion of infected food or organisms.[1] It should be noted that they are separate from the Cerberuses; the latter was created specifically as a Bio Organic Weapon, while zombie dogs are viewed and treated as unintended side-effects of t-Virus dispersal and are thus classified as irregular mutants.

Like their B.O.W. relatives, the zombie dogs retain much of their former agility, with a noticeable increase in durability and aggression. In most cases, potential prey should listen for the sound of padding paws as a clue to their presence, with a growling warning that it has become aware of the player and is preparing to attack. They will let out a pained yelp when killed.

Akin to the canine related t-Virus mutation is a general necrosis in their left eye orbit, leaving their left eye visible bulge out of their otherwise savage but proportional facade, making for an even more fearsome appearance.

As with most victims of the t-Virus, the zombie dogs suffer from necrosis. It should be noted that unlike their B.O.W. counterparts, the Cerberuses, their necrosis is far more severe, resulting in exposed muscles, tendons, and even bones as well as a significantly-decomposed face.

Zombie dogs encountered during these two outbreaks typically roamed in packs of two or three and occasionally four, and adopted random attacking patterns. They frequently encircled the prey before charging in with a leaping attack, pinning them to the ground and ripping their throat out.

Some were encountered at random throughout Raccoon City by several survivors. A few found their way into Raccoon University. One broke into the Raccoon General Hospital in search of prey.

The Raccoon City Destruction Incident is the only known event in which a non-doberman was infected - a labrador.[3] The reason for the frequency in Dobermans being found infected was due to Chief Brian Irons' suggestion to the K9 unit that the breed be used as the police dog for the Raccoon Police Department.[4]

Curiously, these zombie dogs sometimes become active only when in close proximity to prey, completely ignoring the sound of gunfire nearby. This is particularly noticeable in the power room of the Antarctic Base. Whether this is down to the dogs being heavy sleepers or simply a deliberate act of lying in wait for prey to come to them is unknown. These dogs also learned to grab hold of a human arm and would attempt to shake it loose.

In any of the games, the handgun is the best weapon to use against these enemies, as long as the person's timing is accurate and they aim low. With a shotgun, the best strategy is to wait until they actually jump and then fire. This should kill them in one shot and possibly knock any others out of the way, giving the player time to prepare for another shot. The magnum may even be a better choice before the shotgun; in Resident Evil 3: Nemesis and REmake a special animation is played where the canines are decapitated by the magnum. The knife can also be used with the right timing to knock back a leaping Cerberus and then finish them while they are recovering on the ground.

In order to conserve ammo, players can use handguns to knock them off the ground, then switch to the knife and stab them to death. When confronting a group of them, you may have to shoot them to a corner before knifing. This tactic conserves a lot of ammo but need practice to master.

The dogs encountered by Claire Redfield on Rockfort Island were considerably tougher and harder to kill, capable of shrugging off handgun shots without falling.

In Resident Evil: Survivor, take care because they always appear in groups. Use the handgun and don't lose the chance to damage them while they are on the ground.

In Resident Evil Outbreak, they are very weak (and rare) enemies. A player can just shoulder ram them and later stomp on them until they die. Zombie dogs only appear on the hospital's central waiting room and on the university's 1F passage A (but only after the player encountered Thanatos in the Entrance Hall).

In Resident Evil Outbreak File #2, zombie dogs are much more dangerous than in File #1 because they are never alone. They only appear in the RPD kennel. 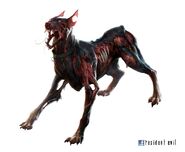 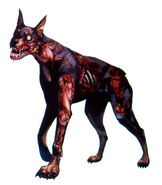 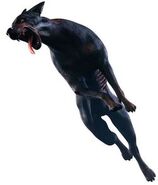 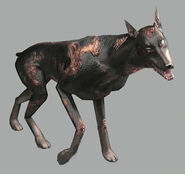 A zombie dog holding the torn off arm of a police officer in its mouth from concept art of Resident Evil 2.

Vector struggling with a Zombie Doberman.

Leon running from a German Shepard Zombie Dog in BIOHAZARD 1.5. 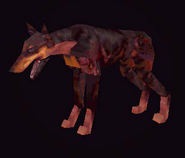 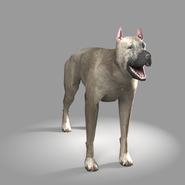 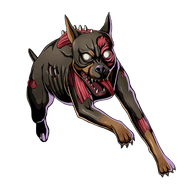 Zombie Dog sneaking up on Leon

Retrieved from "https://residentevil.fandom.com/wiki/Zombie_Dog?oldid=786836"
Community content is available under CC-BY-SA unless otherwise noted.