This creature, also known as just Zombie Dog, is encountered by Leon S. Kennedy and Helena Harper while in Tall Oaks.

The creature greatly resembles the t-Virus infected Cerberus or Zombie Dogs and also the Adjule. Much like the various types of zombies as well, the body of the creature shows signs of decay, causing the muscle tissue and veins beneath the outer fur and flesh to be visible. In some cases, the decay even goes as far as the bone, as some are seen with their spinal column completely visible.

As per its base-creature capabilities, they are very fast and capable of leaping great distances. This makes it very easy for them to pounce on an enemy to bite them viciously. Their speed and mobility, such as being able to leap sideways, makes them extremely difficult targets to hit as well as avoid. They can also be very resilient to damage from some weapons like handguns, so a shotgun is the best bet when confronting these canines. On the hardest difficulty, a single one can take more than three shots from the Lightning Hawk without even dying. Their strength is greatly reduced in The Mercenaries, where they take only one shot from any handgun to be killed.

These creatures will greatly utilize their speed, racing around and past the target, waiting for the right opportunity to attack. When that moment arises, they will leap at their prey, using their weight to tackle them to the ground and proceed to attempt to bite at their throat.

Although they are obviously based on domesticated canines, they seem to operate much like a pack of wolves as some of them are seen barking to garner the attention of other nearby infected canines. This allows them to group together and attack a target from multiple angles, making them significantly more difficult to avoid.[1]

One of the dogs in the distance, barking to gain the attention of others.

The creatures preparing for another attack.

The creature tackling Leon to the ground.

Leon struggling with the creature.

Leon kicking the creature off top of him.

The creature recovering after being kicked off of Leon. 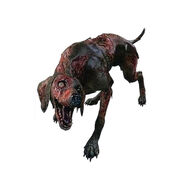